Pianist Yaron Ross performs a wide-ranging repertoire, with a particular emphasis on the music of Mozart. His 7-volume Wolfgang Amadeus Mozart – The Complete Piano Sonatas set is a landmark accomplishment and is imbued with power, passion and original interpretive insights.

Born in Israel in 1950, Yaron Ross studied at the Tel-Aviv University Academy of Music (1968 – 1977) with the legendary pianist Mindru Katz.

Competition in chamber music and solo performance respectively. In the following two years he concertized extensively in Israel and recorded for Israeli and European broadcasting organizations.

Since arriving in Canada in 1978, Yaron Ross has concentrated mainly on the solo piano repertoire.

Among his numerous recordings for CBC and Radio Canada are his 1992 participation in a collective studio recording of Bach’s Well-Tempered Clavier organized by the CBC in memory of Glenn Gould, a live radio recordings of the complete Mendelssohn Songs Without Words (1994) and the complete Two and Three Part Inventions and French Suites by Bach (1996-97).

Yaron Ross has performed the complete cycle of the Mozart Piano Sonatas twice in a series of 5 recitals – in 1985 and in 2006.

Between 2008 and 2016 he completed a studio recording of the complete cycle of the Mozart piano sonatas. The set is available on all major platforms. more 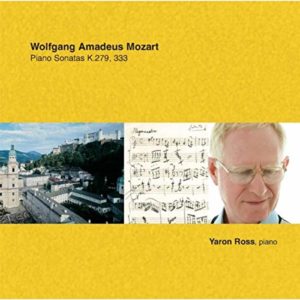 A journey through Mozart's magical universe

"Ross showed a solid commitment to Mozart and his music. Where many pianists have merely glossed over these works or ignored them entirely, he has taken the time to prepare and thoughtfully organize them. His playing is filled with all sorts of inflections that supply personality and vigor."

"Yaron Ross ... is a pianist who listens to himself and to the music while playing. Bach's
English Suite No. 6, for example, was spirited and scrupulously articulated. Similarly
precise and rhythmically pristine was Beethoven's Sonata (Op. 31, No.1)."